It was a pretty dry December and early January in Utah, but the Cottonwoods of the Wasatch received over 70 inches in the last four days alone! 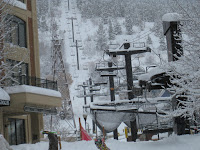 I was fortunate enough to ski The Canyons, Deer Valley, and Park City Mountain in that order the last three days...  Knee deep or better nearly every run!  Tough duty... someone had to do it!
St. Regis...  So far, proud Buyers have closed escrow on 23 condominiums at the new St. Regis condominnium hotel in Deer Valley!   Papa Murphys Pizza is the happy owner of nearly the entire top two floors.  Should have gone into the pizza biz.  A total of 59 were contracted at Sr. Regis, so we'll see how the rest of the closings go!   This development, although Park City's tallest skyscraper, is a wonderful five star addition to Deer Valley's lodging lineup.  Next up... the Montage at Empire Pass.  Twice the size of St. Regis!
Silver Strike Auction...  The much anticipated auction of 8 condominiums at the Silver Strike Lodge in Empire Pass, resulted in the successful sale of all 8, plus another four after the auction!  In a nutshell, prices were bid up about 15% over minimum bid, by 32 bidders last Sunday, Jan 17.   Lucky Buyers did get a great deal, about 40-45% below original list and sales prices.
The developer reportedly spent about $350k on marketing and executing the auction with the auction specialty group: "Accelerated Marketing Partners".   Well worth it!  Selling (pending) 8 of these in one day, was a brilliant strategy for the developer, as it accomplished the goal of the auction, created interest, produced  new sales, and in so doing, established current market value for these properties between $750-776 per sq ft !
As a pleasant surprise, the Strike developer released eleven more to the regular market, at appx. auction-established prices of between $1.26m  and $1.8m!   No auction required, but  firm pricing, no discount invited!  Guess what... sold four more right away!   So that's an even dozen pending at Silver Strike, as a result of the auction process.    So, with now clearly established market prices, the rest of these, mostly four bedroom plans, are still one of the Best Buys in Deer Valley.   If you know anyone interested...  call me!
Now, how must the rest of the Empire Pass resale and new product market adjust in pricing and thinking to continue to interest Buyers of these premiere locations and properties?   Time will certainly tell!