With a little time to kill, I took time out for an update tour of the Deer Valley St. Regis this week.   Rode the new funicular up and down.  It's the first of its kind in North America...   The "tram" operator cut off the allowed number of riders at 14... I suppose that's the current limit.    It is a smooth , glass bound, scenic ride from Snow Park arrival area to the hotel in Deer Crest.   This six million dollar marvel was engineered and built by the same  C-Tec/Garaventa...  the Swiss guys that built the Tram at Snowbird! 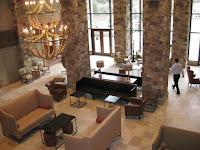 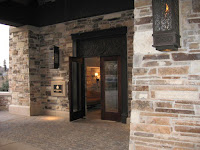 Took a tour of the new restaurant kitchen (impressive... cooking machines that I've never seen before).   It will cook for Jean-Georges Vongerichten’s new J&G Grill with it's opulent 3,000-bottle wine bar .

Jean Georges and partner Phil Suarez have formed a new company with Starwood Hotels & Resorts Worldwide Inc.  (yes, St. Regis is a Starwood Hotel) and Catterton Partners, a consumer-focused private-equity firm which will own, operate, manage and license restaurants in Starwood properties as well as freestanding concepts not attached to the hotel giant's lodging outlets. The deal calls for seven Spice Markets and other concepts world wide. The total number of eating destinations could total 56 with this contract. The first to open were two Spice Markets at the W Hotel in both Atlanta and Istanbul, respectively, and next, the St. Regis Deer Crest.

The Hotel lobby is a beautiful, glass enclosed scenic  experience.   Did I forget to mention the oh-so relaxing 14,000-square-foot Remède Spa   Re-defines "Apres Ski"!
Oh, and I had a look at John Schnatter's little condo at St. Regis...   He's the founder of Papa Johns Pizza. 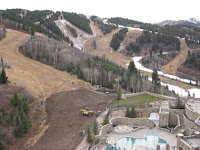 He's doing OK I  suppose...  buying the entire 11th floor of the  St. Regis building, about 11,000 square feet of penthouse residence with 4000sf of  top floor decks!.   Just in case he needed a little overflow, he's also buying a 4000 sf suite just below on the 10th floor,  most excellent ski run and Jordanelle lake views.   I just hope Dominoes can find it when he orders takeout during ski season.  (After all, Papa Johns is only the third largest pizza chain) 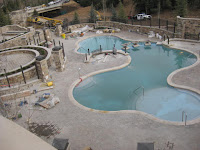 So, how big is the St. Regis... really?   The largest building ever built in the Park City area.   11 stories, plus  underground parking levels, totaling about 500,000 square feet of space.    But... hold on to your hat, as the new Montage at Empire Pass is going to double that, at appx. 1million square feet in size!

I will go out on a limb and predict that when it snows, we'll see another flurry of prime ski homes sold.   There is money on  the sidelines... and where else would you put it?