Brazil gets the Olympics, A few stats

So Rio gets the 2016 Summer Olympics.... Condolences to Chicago, but I think I would rather go to Rio anyway for a summer getaway... sounds more exotic. Brazil has its work cut out for it... but the Olympics are a remarkable experience and a great party! 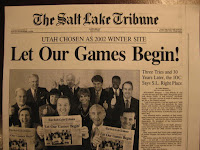 It was in 1995, Saturday, June 17, more than 14 years ago, when the IOC announced that Salt Lake City would host the 2002 Winter Games. I watched the telecast, and jumped out of my chair when IOC president Juan Samaranch made the announcement. Park City would host a lion's share of events... so what happened to Park City real estate as a result? Here is a rundown:


Deer Valley 35 Stag Lodge did sell and close this week for $4.3M! Pretty high priced condo! (Actually a free standing building) With nearly $90M volume sold in 17 single family home sales so far this year, including this Stag Lodge Sale, 2009 has beaten 2008 ytd sales volume in the upper Deer Valley areas by nearly 3 to one! Someone has some money! Of course, these were nearly all shiny, brand new ski in/out homes.

Park City On the other hand, beautiful residential areas such as Park Meadows.... down 61% in sales for first 3 quarters, in a year to date comparison with 08. Also, overall condominium sales in the Park City limits are down 65% in total sales volume for first three quarters.

First three quarters of 2009, the overall dollar volume of all categories of property are down 39% over same period 2008. Wonder how fourth quarter will look with nearly 60 St. Regis closings to record Nov-Dec. for a total of about $180m!
Posted by "AJ" Al Johnson at 2:16 PM