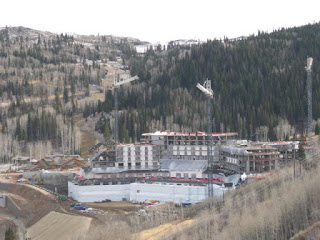 How big is 1 million square feet?   Big!  Here is a current look at the new Montage Hotel and Condominium building at Empire Pass.  Photo taken October 26.   Scheduled to open December 2010, this (reportedly) five star "hotel/condominium/residences" resort will double  the mass and scale of the Deer Crest St Regis (opening in 30 days?)

Condominiums and Residences will be available for sale at the Montage, although prices or availability have not yet been released.   Drop me a note at bigal@parkcitydeervalley.com if you would like prices when they appear! 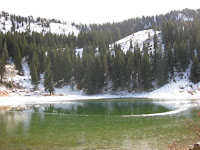 OK, the Montage photo was taken on a fabulous bike ride on the "Mid Mountain Trail".    The Montage is at about 8000ft elevation, and about an hour's climb later, we arrived at 9700 ft elevation, and "Shadow Lake" under the Jupiter lift.

As you can see, above 8500ft was a bit wintry, a bit cold, but rideable on about 2" of fresh snow on single track trails.   Had to do it, as my riding tormentor, Mark Archibald, and I decided it could be the last chance of the year.   We were probably correct, and no... we didn't see anyone else up there! 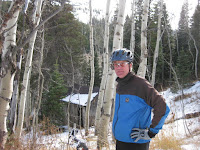 If you have only been on Park City Mountain in winter, you may have unwittingly skied right over Shadow Lake.  It is the beautiful flat snow field just to the left of Jupiter lift looking up.   The few of us who do venture up there in summer enjoy one of the most beautiful mountain scenes in all of Utah, a great spot to stop for a Power Bar!