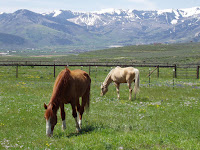 Second grade, Jim Thorpe, PA. (Yes, I went to grade school in the only town in the US named after an athlete) Mrs. Dunbar says..."Class, you did very well on yesterday's test." I looked down and saw that I had gotten a C on mine. Next month, after another quiz, she said... Class, I'm disappointed in how you did on yesterday's test." This time I had an A on mine. Statistics... Sometimes pretty useless unless you are square at the median or the average.

Present Day... July 29, 2009 Both USA today and WSJ post front page feature articles showing new homes sales up for three months consecutively, April through June. Now it appears that new pending sales in the US are up 5 months straight) Great news in general... irrelevant if you just lost your house to the bank. However, most of us today are hanging on every word on CNBC, and are desperate to feel better about things... so for mood adjustment, any good news is welcome in times like these. And we seem to be hearing a bit more the last week or so.

Here's another one... The lower Deer Valley single family home market has been very slow this year(of 33 current listings, only two are currently pending, and last sale was in May) Yet Guv Mitt Romney sold his home for top dollar to a Florida family earlier this year after only 45 days on market! Does he have the A or the C? Certainly the luck!

Around the Park City market, we are still seeing constant price reductions as some stressed owners really need to sell... A couple of short sale offerings, a couple of Bank Owned listings... but not many! Promontory still showing excessive inventory and very few sales in either lots or homes. Low to mid range condos floundering in many locations. However, check this out regarding the high end of the market....

Nearly $125M in high end luxury homes ($3M+ list price) has closed escrow in the Park City/Deer Valley market in 23 sales transactions Year To Date 2009! Highest was a $23M listing in The Canyons. That's three times ($ volume) the same period last year, double that of same time 2005, about the same as 2007, and only $12M shy of 2006, which was a stellar year, with about $137M in similar high end sales! Does the bigger, smarter money know something most don't know? Well, they do have something most don't have... more money!

Also, a home in Empire Pass closed escrow today for over $11M! Another closing today at Knoll Estates just under $4M!

The last developer-owned condo at Arrowleaf Lodge (Empire Pass) pended this week. All those on market now are resales, some of course, below what owner paid.

The "Washington School Inn" in Old Town, listed at $4M, pended this week.

It will indeed be a period of mixed signals in most real estate markets in the coming months, as less distressed Sellers posture on the media's good news and Buyers focus on the bad (still looking for the screamin' deal), and real estate continues a slow but steady comeback, some categories stronger than others! Look for the Deer Valley market to rebound quicker than most, with many nervous but interested potential Buyers waiting for what they feel is the right time!
Posted by "AJ" Al Johnson at 4:09 PM